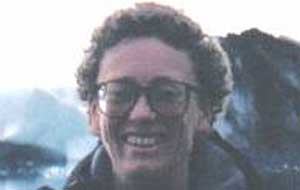 Biosketch:
Wendy Johnson grew up in Tacoma, Washington, the eldest of three daughters of a civil engineer and psychologist/special education teacher. She graduated from Occidental College in Los Angeles, California, with a degree in mathematics. She spent several years as a commercial insurance underwriter and consulting pension actuary in San Francisco and Los Angeles, and then settled down as a consulting casualty actuary for Coopers and Lybrand in San Francisco. She married Glenn Evans in 1989, and they had a daughter and son. With Glenn, she founded Pacific Actuarial Consultants in 1991, and they maintained this actuarial practice together until 2001. In 1995, however, Wendy began to study psychology at San Francisco State University, and obtained a Master’s Degree in Developmental Psychology there in 1999. She entered the doctoral program in the Psychology Department at the University of Minnesota in 2000, and completed her degree there in 2005. She pursues research involving the structure and nature of general intelligence and special mental abilities, personality structure and development, antecedents of individual and sex differences in academic achievement, antecedents of later-life health and psychological well-being, and contributions of cognitive ability to later-life outcomes, with particular emphasis on understanding the underlying transactions between genetic and environmental influences.
Representative Publications:
Johnson, W. & Bouchard, T. J. (2005). The structure of human intelligence: It is verbal, perceptual, and image rotation (VPR), not fluid and crystallized. Intelligence, 33, 393-436.
Johnson, W., Bouchard, T. J., Krueger, R. F., McGue, M., & Gottesman, I. I. (2004). Just one g: Consistent results from three test batteries. Intelligence, 32, 95-107.
Congratulations to all of our conference award winners!
Wondering how to be considered for a conference award? Please see the current conference announcement for information on eligibility, and to check out other opportunities available to graduate and postdoctoral students!