Video and audio about intelligence

David Lubinski interviews Randall W. Engle, Georgia Institute of Technology, at the 2019 ISIR Annual Conference held in Minneapolis, Minnesota.
Randy Engle is a professor of psychology at the Georgia Institute of Technology. Randy is known for his research on working memory, attention control, and intelligence. Specifically, his research takes a combined experimental/correlational approach to investigate the nature of working memory capacity, the causes of its limitations, its role in applied cognitive tasks, and the relationships between working memory, attention, and fluid intelligence.His work has received funding from the National Institute of Child Health and Human Development, the Air Force Office of Scientific Research, DARPA, and the Office of Naval Research. According to Google Scholar, Randy has been cited nearly 50,000 times and his h-index is 80.Randy is also known to be an exceptional mentor. He has chaired 23 dissertation committees and trained multiple post-docs. Many of his former lab members have gone on to make their own major contributions to the field of intelligence, including Andrew Conway, Mike Kane, Zach Hambrick, Nash Unsworth, Tom Redick, and Zach Shipstead.Randy has received numerous awards in his career for both teaching and research. Most notably, in 2020, he was elected to the National Academy of Sciences.Professor Engle’s bio contributed by Andrew Conway, Associate Provost for Research & Professor of Psychology, Claremont Graduate University, USA.

Doug gave this audio interview to a non-academic lay person in May 2020, in which he answers questions about how and why he set up ISIR and about intelligence in general. 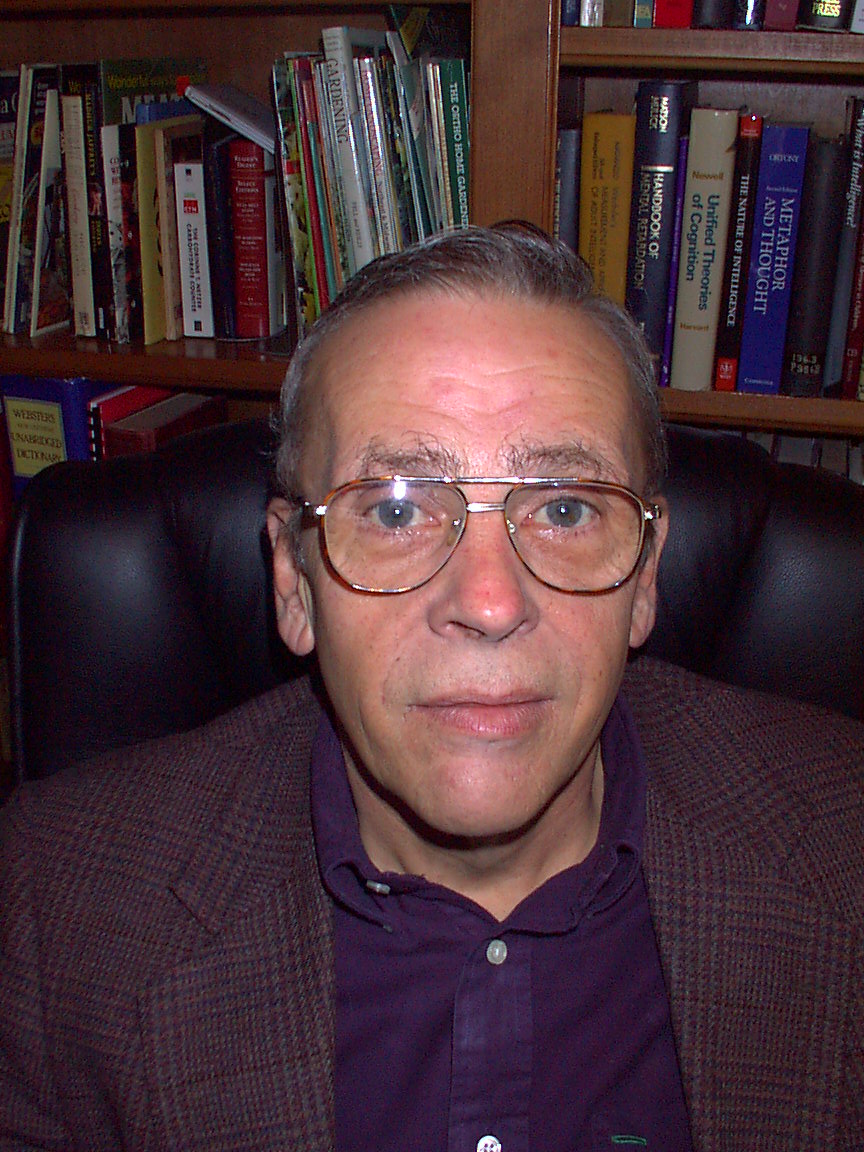 Douglas K. Detterman is an American psychologist who researches intelligence and mental retardation. He earned his B.A. from Boston University in 1967, his M.A. and Ph.D. from University of Alabama in 1972 and was a postdoctoral fellow at Northwestern University in 1972.Detterman taught at University of Dayton from 1970–1972, then took a position at Case Western Reserve University, where he has remained since. Among his many achievements, Detterman founded the scientific journal Intelligence in 1977, and was editor in chief from 1977 to 2016. He then founded the International Society for Intelligence Research in 2000 and was its President until 2011. He has also been a Fellow of the American Psychological Association from 1978–1998, a Fellow and charter member of the American Psychological Society from 1990–1998, and received a Mensa Research Award in 1991. Click HERE to download Doug's extensive CV. And now for some fun facts about the real Doug Detterman that you didn't already know, as described by Doug himself: Cooking - My mother taught her three sons to cook but not her daughter.  She told us that if we learned to cook, women could not take advantage of us.  So we did a lot of cooking.  It is ironic that I did not figure out that it was my mother that was taking advantage of us until after she died.  In any event, since I like to eat I kept cooking and have gotten better over the years.  I generally do all the holiday meals and, since I have retired, much of the daily cooking.  Though my wife also likes to cook so unlike many families we sometimes fight to be able to cook.  By the way, from the beginning my mother insisted that whoever cooks must clean up and that is what we do. Poker – I learned to play poker in the Navy in which I enlisted in 1960 and served through 1963.  I paid for lessons but got pretty good by the time I was getting out of the Navy and in the last game I played in in the Navy I won what would be about $2,500.  This allowed me to buy an engagement ring and propose to my wife so I guess you could say that I won my wife in a poker game.  We were married in 1965 while I was in college at BU. I have continued to play weekly or at least a couple times a month.  My wife never complains about my playing poker. You will also find on my vita a study done with Mike Dedono that shows poker is a skill not pure luck. I also taught my son to play poker when he was 11 or 12.  My wife was in nursing school so I took my son with me to Anaheim, California the home of Disney Land.  To add interest to the trip we took Amtrak to Seattle, Washington and down the west coast to Anaheim.  This was a 3 night trip and I had never considered that a kid would get bored.  So to keep him amused, I taught him to play poker.  Over the years he became an exceptional player and still plays very well. Traveling – one nice part of my job is that it has given me a chance to travel widely.  I always wanted to travel but was quite shocked to find out my wife hated traveling.  I was surprised to find such people but they are much more common than one would expect.  But she has not objected to the trips I have taken as long as she did not have to go along.

Audio Interview with Richard Haier on the Nature of Human Intelligence

Dr. Richard Haier is Professor Emeritus in the School of Medicine at the University of California, Irvine. His research investigates structural and functional neuroanatomy of intelligence using neuroimaging. He created an eighteen lecture video course called The Intelligent Brain and he is author of The Neuroscience of Intelligence. Dr. Haier is co-editor of The Cambridge Handbook of Intelligence and Cognitive Neuroscience and is editor-in-chief of Intelligence, a scientific journal. Dr. Haier received the lifetime achievement award from the International Society for Intelligence Research (ISIR).

An interview with Abdel Abdellaoui

Filmed via Zoom during lockdown due to COVID_19, June 2020. "We geneticists often talk about genetic and environmental influences, but those are intimately intertwined. Our genes have evolved to build a creature that is very adaptive to its environment."  Abdel Abdellaoui, June 2020

Abdel Abdellaoui is a doctoral researcher at the Amsterdam University Medical Centre.  He is involved in a wide range of studies on the complex relationships between human DNA and individual differences in behavior, cognition, and mental health. He is particularly interested in how collective behaviors, such as migration and mate-choice, influence the genetic make-up of populations. When he is not working on genetics, he likes to ride his bike and play computer games with his 10 year old son.CLICK HERE to read Abdel's article "Genetic correlates of social stratification in Great Britain". CLICK HERE to read Abdel's article "Population structure, migration, and diversifying selection in the Netherlands".

Razib Khan, Insitome, gave the Holden Memorial Address for Distinguished Journalism at the 2019 ISIR Annual Conference held in Minneapolis, Minnesota. This lecture is awarded each year to someone who has made an outstanding contribution to the communication of science to the broader public.

Being intelligent about the end of the 20th Century

Razib Khan has an academic background in the biological sciences, and has worked for many years in software. He is a geneticist and is a prolific science communicator, covering subjects like genetics in general, population genetics and personal genomics. He runs two weblogs called Gene Expression, one hosted by the ScienceBlogs network, and is an Unz Foundation Junior Fellow. He is currently working as the Director of Scientific Content at Insitome in Austin, Texas.

Professor David Lubinski is the Cornelius Vanderbilt Professor of Psychology Co-Director, Study of Mathematically Precocious Youth (SMPY) Investigator, at the Vanderbilt Kennedy Center for Research on Human Development. Professor Lubinski's interests are concentrated on psychological measurement and assessing individual differences in human behavior. Using longitudinal methods, his empirical research is focused on the identification of different types of intellectually precocious youth and the conditions for enhancing their learning, work performance, and creativity. With Camilla Benbow, he co-directs the Study of Mathematically Precocious Youth (SMPY), a longitudinal study of over 5000 intellectually talented participants, initially identified before age 13. His framework for studying talent development is best described in Lubinski and Benbow (2000, 2006) and his psychological orientation is found in Lubinski (1996, 2000, 2004).Professor Camilla Persson Benbow is the Patricia and Rodes Hart Dean of Education and Human Development at Vanderbilt University's Peabody College. She has led Peabody, one of the nation’s leading colleges of education and human development, since 1998. A prominent scholar of talent identification and talent development, Dean Benbow also co-directs the Study of Mathematically Precocious Youth, a longitudinal study examining the developmental trajectories of more than 5,000 individuals now in its 45th year. She is particularly interested in developing intellectual talent and excellence in science, technology, engineering, and mathematics. Dean Benbow began her academic career at Johns Hopkins University following completion of her doctorate in education in 1981 before moving to Iowa State University and later Vanderbilt. She has served on the National Science Board, as vice-chair of the National Mathematics Advisory Panel, and on the board of the American Psychological Foundation. She is a past trustee of Fisk University. A fellow of the American Psychological Association and the American Educational Research Association, she has received the David Imig Award from the American Association of Colleges for Teacher Education (2010), the President's Award from the National Association for Gifted Children (2009), and the Distinguished Alumna Award from Johns Hopkins University (2008). In 2004, she received the Lifetime Achievement Award from the MENSA Education and Research Foundation.